Riding City Bikes at Night: How to Stay Safe

Visibility is a big issue for bikers even during the day, so learning how to bike at night is extra important. Here are the best ways we've found to be seen and stay safe on our city bikes!

Make sure your bicycle is properly equipped. In most states, bicyclists are required by law to have BOTH a white light on the front and a red light on the back of their bicycle.  Many lights are relatively inexpensive (think $15), but consider paying a few dollars more for rechargeable ones.  (Our city bikes are all outfitted with USB-powered lights for charging while we work!)

Similarly, most states require a bicycle to be outfitted with a white reflector in front, and a red in back.  Under federal law, all new bikes come with reflectors, but if you're buying used, make sure you check before you decide to bike at night.

It's also important to note that when visibility is decreased (like at night, or in the rain), you'll do well to get noticed in other ways--especially by making noise.  New York law requires every bicycle to be equipped with a bell, but just because that might not be the case in your state, doesn't mean it's not a good idea.  It will help you communicate your whereabouts to pedestrians and drivers who might not have seen you in the dark.  (Now might be a good time to check out the cutest bells we've found for city bikes...)

The more of you is visible when you bike at night, the safer you'll be, and adding reflective strips to your clothes & gear--or even purchasing garments specifically designed to be reflective--is a great way to make this happen.  Check out our recommendations for various jeans and other reflective clothes!

We all love to spend summer days on our city bikes cruising to some awesome tunes.  But at night, it's a different story.  Here in Brooklyn, it's legal to ride with one earbud in--but that doesn't mean it's advisable at night, when you need to be able to rely on your other senses--specifically your hearing.  If you do want to listen to music, consider a small speaker.  It will keep you in the groove and actually help you stand out to drivers who might not see you.

Choose a Route with a Bike Path

While riding in traffic isn't dangerous per se, it certainly gets more dangerous at night, when drivers who probably aren't expecting you may now also be unable to see you.  Making sure you stay in a bike lane for the duration of your commute is a great way to limit the dangers of riding at night.

Use Crosswalks Instead of the Turn Lane

There are usually at least two ways to make a turn when riding.  The first way is to ride across the intersection, stop at the crosswalk, wait for the light, cross with the pedestrians, then merge back into traffic and continue on your way.  The second is to wait in the turn lane (i.e. in the middle of the street) with all the other cars.  The former can be a time suck, but it's definitely the safer choice when visibility is decreased, and waiting in the middle of the street to turn becomes a dangerous choice.

Have other strategies that help you bike at night?  We'd love to hear them!  Leave a comment below or tweet them at us.

A
Swept Back Handlebars A. (Calabasas, US)
Bar end shifters

These handlebars look great but the bar end shifters I meant to install won't fit since the diameter of the holes are very small. A huge bummer but I guess I should have anticipated this issue.

Thanks Asaf. The bars are 25.4 at the clamp and 22.2 at the grip so any bar end shifter would need to fit that diameter. -Ryan Zagata

Franklin arrived along with beautiful Autumn weather....A pleasure to ride and it has taken its rightful place in my bicycle line-up.
Thanks to Ryan and his crew for the great customer service and follow-up.

Thanks so much for taking the time to share your feedback and for allowing us to sort a few hiccups with your order. -Ryan Zagata

It was fun riding a bike again! I love the look of it and even after riding it for a month still looks amazing! Very nicely made

Thank you so much for sharing Danny. We are thrilled to learn that you're enjoying your Franklin 8 city bike. -Ryan Zagata

S
Lorimer Steven (Brooklyn, US)
An easy purchase and a lovely bike

Our experience buying this bike and the bike itself were both really good. The bike was shipped to our local bike shop quickly and without a hitch. The bike itself is just beautiful. We bought this for an 11 year old girl. She loved it right away.

Many thanks for sharing Steven. We are thrilled that your daughter loves her Lorimer. -Ryan Zagata

W
Bedford 8 Speed Will (Medford, US)
What a ride!

I love this bike! It ride’s so smooth. It’s my first commuter. The gears shift like butter. It’s so comfortable. It shipped so quickly and was perfect from the start. We bought 2 and have already put about 30 miles on them. Taking them to Cape Cod and Martha’s Vineyard this weekend for my birthday. Everyone loves the color and the look. I couldn’t be happier. 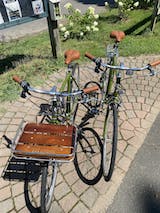 Thank you for sharing your experience Will. It's great to learn that you're making quick use of the bikes and LOVE when our customers share photos. -Ryan Zagata