*For United States customers, the following is currently available:

*For Canadian customers, the following is currently available:

The perfect balance of comfort and style.

Timeless design and premium components make the Willow our most comfortable, and best looking commuter. The Willow is our flagship step through, and has been with us from the beginning. Made in collaboration with legendary frame designer Grant Petersen, it's a bike we've always been proud to bear the Brooklyn name. Premium components for a premium commute

The Willow comes stock with a rear carrier, color matched fenders, and rust resistant chain. Match that with the ultra comfortable Selle Royal saddle and you start to understand why it's the most comfortable and capable commuter in our lineup. Shop similar models to the Willow 3

I love my 3 speed Willow bike! It's a smooth ride and the seat is super comfy. I also appreciate the sleek design and the upright seating. The owner, Ryan, in Greenpoint, Brooklyn is exceptionally down to earth and he went out of his way to let us make a showroom appointment during the busy holiday season. He gave us a warm welcome and was very helpful in giving me advice about which model would best work for me. I highly recommend any bike from Brooklyn Bicycle Co.

Thanks so much for passing by Valerie. We are thrilled that you are enjoying your new Willow City Bike. -Ryan Zagata
P
P.P.
Best Christmas Present Ever for My Wife!

This bike (all of Brooklyn Bicycle's bikes) are insanely awesome. They are beautifully designed and crafted. Exceptionally comfortable ride. But, wow, the company's customer service is the shining star - you are really, truly appreciated and loved as a customer and it comes through in the attention that everyone we interacted with at Brooklyn gave to us.

Thank you so much for sharing Phil and thank you for acknowledging your experience with our team. We are thrilled your wife is enjoying her bike. Thanks again. -Ryan Zagata
R
R.G.
The perfect bike

I have enjoyed working with Brooklyn Bicycle Co. from start to finish and the bike is everything I wanted it to be. I attached a burley tandem bike for my daughter and we love biking around town together. Thank you for a comfortable, easy to ride and stylish bike!

Thank you so much for sharing Rebekka. We're thrilled you're enjoying your Willow 3. -Ryan Zagata
D
D.T.
Amazing bike, some inconsistent sizing issues

This was what I wanted for my commute bike, with the fenders, chainguard and rear rack all part of the bike which is cheaper than buying them all separately. I visited a bike shop in a nearby town and though they didn't carry this exact model, they let me test out the Lorimer they had on hand. I decided that if all of the bikes were the same high quality as that Lorimer then getting a bike from Brooklyn would be a safe bet. When the bike arrived at my local bike shop, the owner who assembled the bike for me was impressed with its build quality and commented that it was a very good bike for commuting and city riding in general. He even offered to provide a free tuneup if I brought back the bike after about a month of riding even though I didn't purchase the bike from him (and I have taken him up on that tuneup, all that was needed was having all the bolts tightened again and the front fender moved a bit further away from the brakes to avoid noise while braking).

The only major issue I've had (which doesn't have anything to do with the actual build quality of the bike, by the way) is that the sizing numbers listed on the bike do not match up with the numbers listed on this website. The numbers for the Large size listed on the website says 66 to 75 inches. However the sticker on the bike clearly indicates that it is a Large size meant for 5'8" and above (68 inches). Having tried a Large Lorimer and checking the height and inseam measurements between both the Willow and the Lorrimer I was not expecting any sizing issues. I am 5'7" (67 inches) and the seat was too tall for me. I can only get on the bike without jumping by removing the rear reflector and moving the seat all the way down to the bottom. If I was even an inch shorter this bike would be completely too large for me to get on. If I had known this beforehand I would have purchased an S/M sized bike. Other than that I have no issues with the bike.

Thanks so much for sharing Devin. We are glad you're enjoying your Willow. Size as it's a combination of height and inseam. We try to provide some fairly accurate generalizations based on our experience but also encourage anyone with questions to reach out and consult with us. Thanks again Devin. -Ryan Zagata
L
L.N.
Christmas Present for my Wife

My wife was so thrilled with her new bike. My son even gave her the box to go on the back of it. She wanted a commute bike, and as soon as holiday break is over, she will give it a go. She has taken it out everyday and loves it. She is 5’-9” and the large Willow 3 fits perfectly. She loves the color too. Since I did the purchase, I can say without a doubt that the service is awesome. The whole process was very easy, and picking it up at the local bike shop all put together is a fantastic service. I am completely happy with all that Brooklyn Bicycle Co has to offer. Thanks! 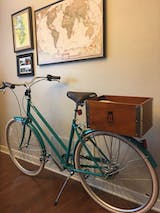 Thank you for sharing and for the kind words Loren. We're thrilled your wife enjoyed the gift. -Ryan Zagata
B
B.
Awesome Bicycle

Thank you Barry. We are thrilled that your daughter enjoyed her bike and we appreciate you taking the time to share this feedback. -Ryan Zagata
123

You've made it this far.