In between sizes? Reach out to us for personalized guidance. Have a question on sizing? Check our bicycle sizing guide by clicking here.

How to measure your inseam.

The MOST IMPORTANT measurement when sizing a bike is your inseam length.

Don't base your inseam simply on your jean size.

The more precise, the better.


1. Stand with your back against a wall and spread your feet 6-8" apart.

2. Place a book between your legs and up against the wall, spine up; raise it until snug against your crotch (this mimics your bike seat).

3. Have another person measure from the top of the book (spine) down to the floor. The Driggs 3 is currently available for purchase in select colors/sizes.

For pre-orders: please read our full pre-order terms before placing your order

▼Learn more about this model The Driggs is our flagship model, and has been with us from the beginning. Made in collaboration with legendary frame designer Grant Petersen, it's a bike we've always been proud to bear the Brooklyn name. The Driggs won't be the fastest or lightest bike on the road, but it will absolutely be the most stylish. With its signature double top tube, color matched fenders, and premium paint job, the Driggs was designed with one purpose - to turn heads.

Some things are just meant for each other...

Accessories include free installation when purchased with a bicycle This bike has been very good to me so far, except for the rear rim. Although I always ride at the recommended tire pressure, the rim warped about a year in, and now three spokes have broken. Other than that, the bike has been reliable, user friendly and stylish.

Thanks for sharing Andrew. Often times when a spoke fails, the remaining bikes are severely stressed if the bike is continually ridden. Even if you repair the offending spoke, the others may well fail over time. We suggest to have the wheel rebuilt if any spokes fail to help ensure the integrity of the wheel is maintained. Thanks again. -Ryan Zagata

After borrowing my wife’s Driggs for a good hunk of the last year, I went ahead and got my own this summer. This is a great all-around bike that is going to see a lot of duty scooting around town, hauling groceries, trying to keep up with the kids, and just getting out of the house for no reason.

For starters, I’m guessing that the biggest apprehension to grabbing one of these is the idea of buying a bike without kicking the tires. Two things on that. First, we had our bikes built up at two different bike shops, and both let us know that they were impressed with these bikes, commenting on the quality of the manufacturing and components. For our second Driggs, the mech who built it up also unboxed it. He gushed about the packaging and the care that went into safely and securely getting everything in and out without so much as a hint of a scratch. So don’t let online shopping be a reason not to go with Brooklyn.

If my wife had not snagged a Driggs last year, I don’t think it would have been my first choice. I’ve just always been into the more aggressive look of a flat-barred bike like the Bedford or the Wythe. But there is something freeing about the attitude of the Driggs. Its not a full-speed ahead, tuck position, dragging your knee on the ground when you turn kind of a bike. It’s more like a natural extension of your self in cruise-mode.

The combo of a three-speed internal with 700x35 tires is a sweet set-up for most every urban situation, unless you have significant hills. You’re not going to be jumping curbs, but you’re also not going to fear the occasional pothole.

The Driggs only comes in two sizes, and I fit dead center between the two. Between the sizing guide to get you started and the adjustability of the seat post and stem, you have a decent amount of room to get a dialed in fit.

I have read that the vegan leather handlebars and saddle can get a little slippery when wet, but I haven’t found that to be true. My wife has the Selle Royal Touring, and I have the retro Spring Comfort, and I like them both equally. I was actually planning on upgrading to a Brooks, but I just can’t justify it, because the existing combo looks so good together.

The only problem I’ve had since getting it has been deciding on whether to put a rack on the front. On the back end, you can’t go wrong with any of the myriad rack trunks out there. On the front, I’m trying to decide between a utilitarian basket or a low-profile carrier just big enough for a six-pack. It’s a tough decision, but again, I’m pretty sure there isn’t a wrong answer.

All in all, we just couldn’t be happier with these bikes.

Thanks Steve for sharing such a thorough and all encompassing review. We're thrilled to have you and your wife riding our bikes. -Ryan Zagata

The Driggs 3 is a great bike so far. I appreciate that it came assembled and that it includes fenders and a rack. I replaced the included rack with a Portland Design Works bamboo rake which goes well with the style of the Driggs. I appreciate the 3-speed gears, I am used to having a fixie Linus bike, so this is a great upgrade. The bike is very comfortable to ride, especially being upright, although bumps are noticeable. The Driggs is great for hauling groceries, I use a Linus single pannier, but it's not an agile or speedy bike, which is fine for my use. Fits my needs and will hopefully hold up!

Minor Cons (which I was aware of prior to purchase): Cannot place a U-Lock within the frame. The bike is pretty heavy, but not unmanageable. I wish it was all black. I would love if the pedals, kickstand, gear, and handle bar and seat-post were all this lovely matte black to match, but I understand why that would be an exceptional ask.

Thank you for sharing such a thorough review Karen. It sounds like you've got your Driggs well dialed in. -Ryan Zagata

I love this bike! The matte black is gorgeous, and the XL is a huge bike that fits my frame perfectly!

Thanks for sharing Thomas. We are thrilled you are enjoying your Driggs 3. -Ryan Zagata

I love my Driggs! I wanted a fun bike that could tackle small hills for neighborhood rides. Couldn’t be happier. 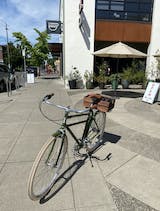 Thanks for sharing Brooke. We're thrilled you're enjoying your Driggs. -Ryan Zagata

This bike was everything I dreamed of, and then some. The matte black is stunning, and the cognac brown handles are not only aesthetically pleasing, but super comfortable as well.
It is even better in person than it was online.
If you’re even considering it, just do it.

Such a good price; great quality. 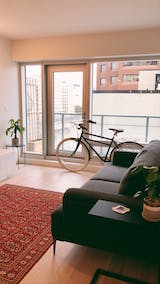 Thanks for sharing your feedback and the amazing photo. Glad you're enjoying your Driggs. -Ryan Zagata

Shop Similar Models to the Driggs

You've made it this far