We wanted to learn a little bit more about the community surrounding Brooklyn Bicycle Co. bikes, so we created a section of our journal dedicated to some of the people we’ve been fortunate to call our customers.

Each month we feature a different member of the Brooklyn Bicycle Co. community and share what makes them tick. Read on to learn about the most recent member of our community spotlight... Where is Kafe Racer located? What area few of your favorite things about the community surrounding your shop?

Kafe Racer is located at 998 Douglas Ave, Dunedin FL. It’s on the corner of Main St. & Douglas Avenue right next to the Pinellas Trail - one of the most beautiful bike trails in all of Florida. You have a pretty unique background as a racing driver. What drew you to racing and how did you get started?

My career in motorsports started with Go-Karts. As a young boy my father, Marc Heylen, bought me a pedal-powered Kett Kar that my friend and I used to race around our neighborhood. When my friend, Tom, upgraded his pedal kart to a proper racing Go-Kart he invited me out to the local kart track. As soon as I got behind the wheel I knew I would need my very own kart - which is where it all began.

After a year of nagging my parents for a go-kart, my dad purchased a used  Italian Tecno Chassis. I spent every waking minute in the garage, keeping it clean and making sure it was always ready for the track. The next four years were spent going to club races and eventually moving to National level competitions. When I was about fifteen-years-old, I was approached by Paul Lemmens, the owner of the prestigious GKS team. Lemmens offered me a test and after a successful test run, I was offered the opportunity to spend the summer working in his shop in exchange for a ride with their racing team. Come summer’s end, my parents had arranged accommodations with the Lemmens’ family so I could work in the shop full-time and continue racing. I ended up living with Paul and his wife, Lisette, for the next five years - the Lemmens’ became a second family to me.

Over those five years I was able to travel the world racing karts with GKS. At 20-years-old I had won the World Cup race in Monaco and a round of the European Championship in Genk. As a young adult at the beginning of my career, this was one of the coolest experiences and I will always be grateful for my time with their team.

By the end of the 2000 racing season, I would move on from racing karts to cars. I moved to England to partake in the British Formula Ford Winter Series. After a few years and working small jobs left and right, I was picked up by Formula Ford constructor Van Diemen. With the team I accomplished five wins, fifteen podiums and a win at the prestigious Formula Ford Festival - an event that has propelled the racing careers of many drivers.

After a significant career with Van Diemen, I then signed with the Mercedes Junior team in 2003. Unfortunately the program never successfully came together and for the first time since the start of my career, I struggled to even finish in the top 10.

The following year I decided to move back to the German Formula 3 series where I had six wins and eight podium finishes. This lead me to a seat in the 2005 World Series of Renault touring car championship which I wound up winning. After this, I remained pretty busy throughout the remainder of the year while simultaneously thinking about taking my career to the United States.

In 2006, I was lucky enough to have the opportunity to compete in the Champ Car World Series, driving for the Dale Coyne’s team. Driving alongside Indycar champion, Cristiano DaMatta, as my teammate - I was able to quickly learn to drive the Cars. I eventually recorded the best results that the Coyne team had ever seen, I received fifth place at the Cleveland Grand Prix, and out qualified my much more experienced teammate in about half of our races.

In 2007 I continued to drive in a Champ car after making a last minute deal with Conquest Racing team. I worked closely with their engineers and crew to develop a car that would be capable of winning on multiple tracks and terrains. This led to a second place finish at the Grand Prix of Holland with the best finish of the season as well as the best finish ever recorded for the Conquest Racing team.

In 2011, I competed in the European Sports Car Championship in a Porsche. Since then, majority of the work I have done has continued to be with Porsche while working  with great teams such as Wright Motorsports, RS1, as well maintaining a close relationship with PMNA, Porsche Motorsport North America. Tell us about Kafe Racer. How has your experience in racing translated to opening your shop and selling bikes?

The cycling sport actually came from my mom’s side of the family. Growing up in Belgium, my uncles rode bikes at a fairly high level and would always try to convince me to get out on the bike with them. I’m really not a huge fan of the cold weather, so the thought of being out on the bike in the cold didn’t ever appeal to me. Of course I always had a bike and would ride to school or around town, but never professionally.

It wasn’t until I moved to the US in 2006 that I developed a real passion for cycling. Riding became a hobby that later grew into racing at an amateur level - it’s brought me the same level of joy as racing cars.

I never thought this would grow into owning a bike shop and it was never really apart of the plan. However, about four years ago I started thinking I needed to do something outside of just racing cars. I put a lot of thought into what my next move would be but never really pinpointed a specific idea. One day I was out and about in Dunedin when I heard there was a bike shop possibly going up for sale. After a few conversations with the owner, he made me a deal and sold me the shop.

I simply stumbled into it without a plan but have loved it ever since. I’ve put a lot of time and effort into Kafe Racer over the last two years and it’s just been a really fun experience. Racing cars is still my number one job while the bike shop remains a great hobby. It’s in a great location with a dedicated and hard working staff who have become family.

How is your shop involved in your local community? Do you offer community impact programs and/or events for local residents?

We always try to help out and support the local businesses and people in the community any way that we can. Over the last two years we have worked with a handful of local Dunedin schools by bringing bikes to the students. We have been heavily focused on finishing construction here at the bike shop over the last few years, but once we are complete we plan to organize several yearly events for the community.

Run us through your perfect day biking around Dunedin, Florida.

Dunedin is known for all of its local events, micro breweries and is also home to the Toronto Blue Jays for spring training. It seems like every week there is some different going on - whether it’s a music event, art show, local market, car show, or boat parade - there is always something to do. Majority of the people who come to Dunedin, come for this specific reason. For me, riding around town and just enjoying everything that Dunedin has to offer is my perfect day. I also enjoy riding along the Pinellas Trail which is one of the nicest bike trails in all of Florida.

Share something that you are really excited about right now. Could be a favorite book, recipe, cocktail, movie, taco stand, upcoming shop event, etc.

I’m really excited to get back on the bike. I’ve been working on Kafe Racer a lot over the last year and a half and we are getting close to the grand opening. Once everything at the bike shop is up and running to full capacity, it will give me more time to enjoy my bike again.

In the words off our customers...

Good quality product. Very useful during evening commute. My only regret is that it doesn’t provide much light into the road ahead, but overall, works. Good product. Would recommend

Thanks for sharing Amaka. There are two types of bikes lights - ones for lighting the road ahead of you (think headlights on a car) and ones for being seen by others (think running and parking lights when your car is on) - these lights, are designed to make you very visible to drivers. While the front light does provide some light in front of you, there are also very specific lights designed to light the road ahead of you. -Ryan Zagata

I like it. It looks and feels good. My favorite feature is the hole you can weave your security cable through. 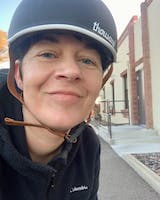 Great photo! We are glad you're enjoying your helmet. -Ryan Zagata

Perfect ride! In love all day every day 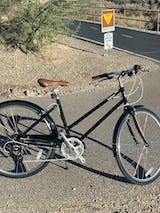 Thank you so much for sharing Amaka - love the photo also. We are thrilled you're enjoying your bike. -Ryan Zagata

Feels solid, comfortable and easy to ride. Picking up the bike from the local bike store was quick and easy. What more could I ask for?

Thanks so much for sharing. We're glad your husband is enjoying his bike and that you had a seamless experience. -Ryan Zagata

My adult daughter researched the most comfortable bicycles and told me about
Brooklyn bicycles - her dad and I purchased it for her for Christmas and she absolutely loves it!!!!!

Thanks for sharing Terri. We're glad it was a hit. -Ryan Zagata